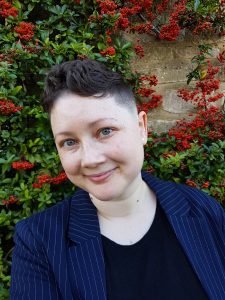 Laura primarily teaches FHS Paper 1 (Shakespeare) and FHS Paper 3 (Literature in English 1550-1660, Excluding the Works of Shakespeare) for St Anne’s, as well as supervising dissertations. Laura is a fellow of the HEA.

Laura’s research focuses on disability (especially neurodiversity) and early modern literature. Her current project, Religion, The Family, Law and Neurodiversity in 16th-18th Century European texts, is supported by a grant from the John Fell Fund.

Her forthcoming book, Shakespeare and Neurodiversity is about teaching Shakespeare inclusively. Her first book, Refusing to Behave, looks at people who do not behave according to social norms in 16th-17th century English and Spanish literature.

She has also worked on Shakespeare and cognitive theory, and early modern hell literature.

Laura is also PI of ‘Neurodiversity at Oxford’; this project, run with Dr Siân Grønlie and enabled by a grant from the Oxford Diversity Fund, provides a range of support, social activities, and information for all neurodiverse individuals at Oxford starting in the 2021-2022 academic year.

‘The Name of Grim: Tracing the Character of Grim the Collier in sixteenth and seventeenth century drama’, Early Theatre 24(2) (2021)

‘“Some Enormous Meaning”: Metaphor, ASD, and Moving Away From The Lion, The Witch, and The Wardrobe’, Moving Impressions, ed. Stuart Bell (London: The87 Press, 2021)

‘The Taste of Food in Hell’, ‘The Literature of Hell’, ed. Margaret Kean Essays and Studies (Oxford: Boydell and Brewer, 2021)

‘Her Silence Flouts Me: Stillness, Silence, and Cognitive Underload on the Shakespearean Stage’, in Peter Garratt, ed, The Cognitive Humanities: Embodied Mind in Literature and Culture (Palgrave: 2016).