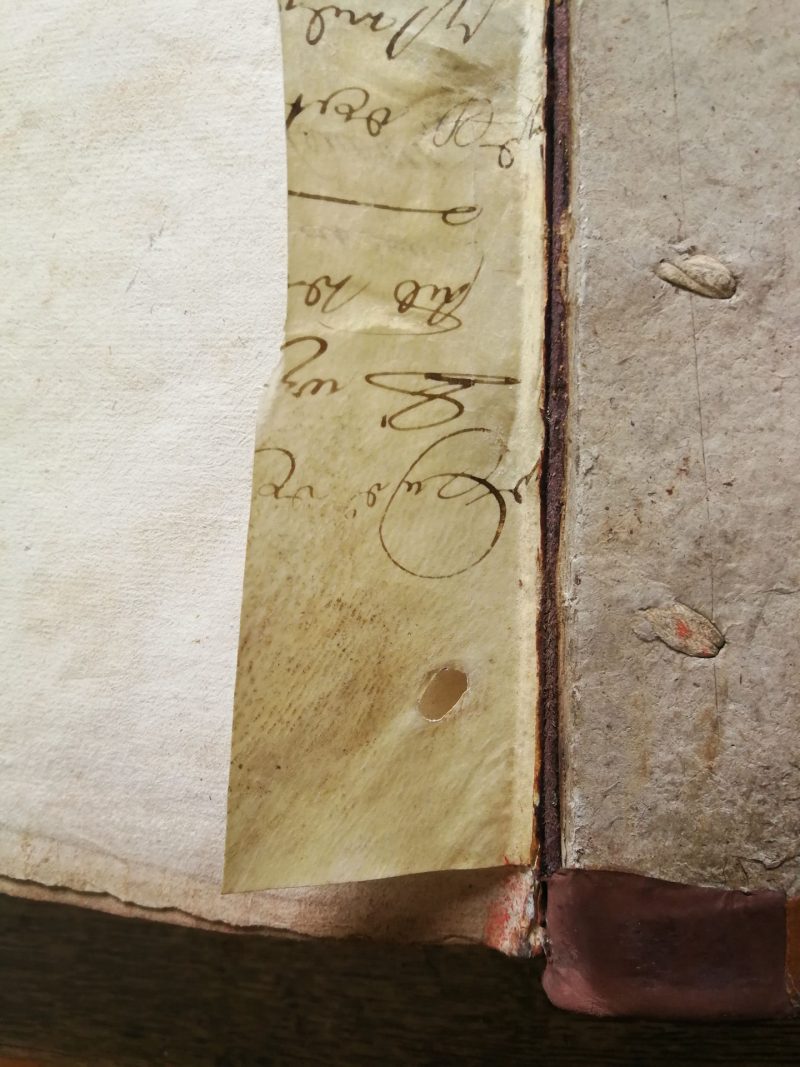 Binder’s waste is the paper or parchment traditionally used by bookbinders to pad and reinforce the binding structure of a book. It was more cost effective to re-use sheets that had already been printed or written on, especially in the Early Modern period when paper was harder to make, hence the name ‘waste’.

What binders used as waste can relate to contemporary political events or cultural shifts. For example, during the Dissolution of the Monasteries by King Henry VIII, ecclesiastical libraries were destroyed and their contents sold, often ending up in binderies where some fragments survived the turbulent time hidden in bindings. Pieces of waste can also tell researchers what was considered valuable by book makers, and what had little or no value. The examples on display here are largely from periodicals or newspapers, as these more ephemeral items were less likely to be kept after use than a bound book.

Often, the only way to see what has been used as binder’s waste is when part of the binding breaks. This is usually the spine, which you can see in some of the books on display here. 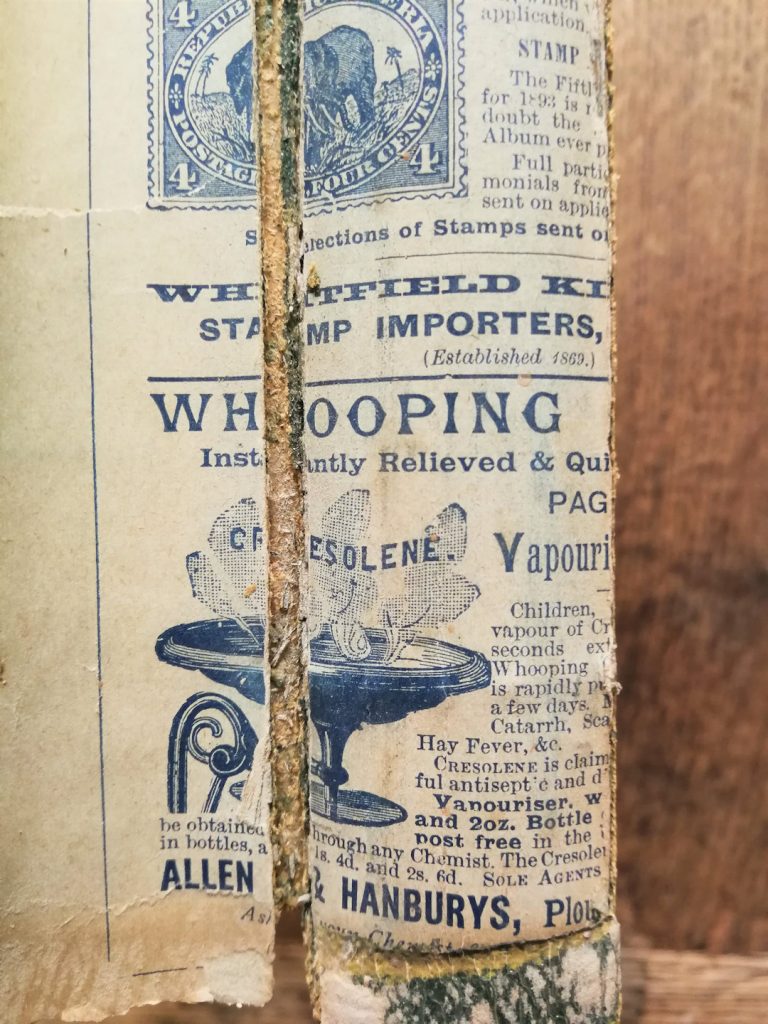 Here, an adverts section of a newspaper has been revealed by the broken spine. It is likely from the late 1800s, and among other things advertises ‘Dr. Tibbald’s Blood Tonic’, a medicine purporting to cure everything from acne to gout, and an Allen & Hanburys cresolene vaporiser for the treatment of whooping cough and influenza in children. Cresolene is made of coal tar, so it’s easy to imagine exactly how good inhaling its vapours was for children! Interestingly, Allen & Hanburys went on to be acquired by Glaxo Laboratories Ltd., which eventually became part of GSK, the modern pharmaceuticals giant.

The full adverts would have looked similar to the images below. 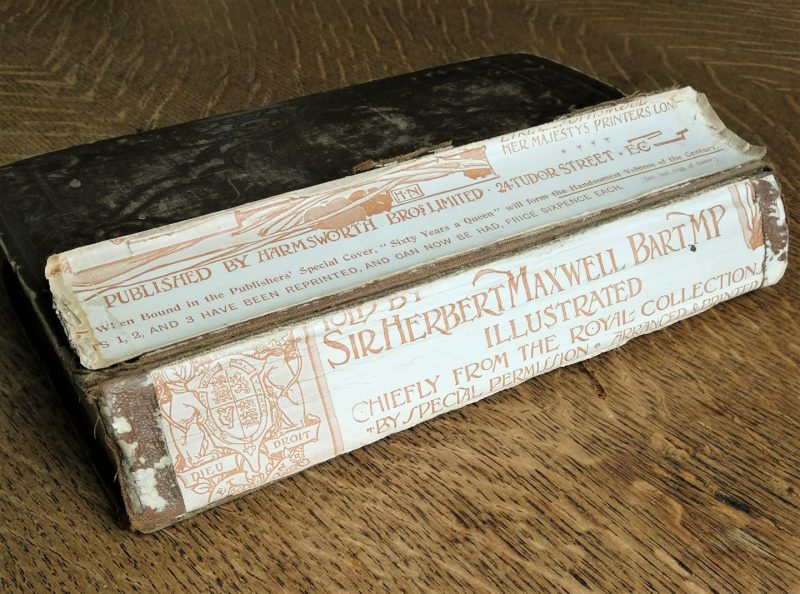 The first issue of ‘Sixty Years a Queen’ has been used in the spine of this book. It was a serial publication of ten issues charting the reign of Queen Victoria, and owners could get them bound in the publisher’s accompanying cover when they had a complete set. Sadly, this issue never got to ‘form the Handsomest Volume of the Century’ and was instead re-purposed as waste.

The illustration preserved upside-down on the spine of this book shows Mr. Weller, first seen in Charles Dickens’s The Pickwick Papers. This illustration actually comes from Dickens’s short-lived periodical, Master Humphrey’s Clock which featured some Pickwick Papers characters in its short stories, which framed instalments of the serialised novels Barnaby Rudge and The Old Curiosity Shop. Dickens himself cancelled the periodical in 1841, in favour of releasing writings on a monthly basis rather than in the weekly paper.

The rest of the illustration is hidden by the binding, but the image to the right shows what the full picture looked like, and the text it went with can be read here. 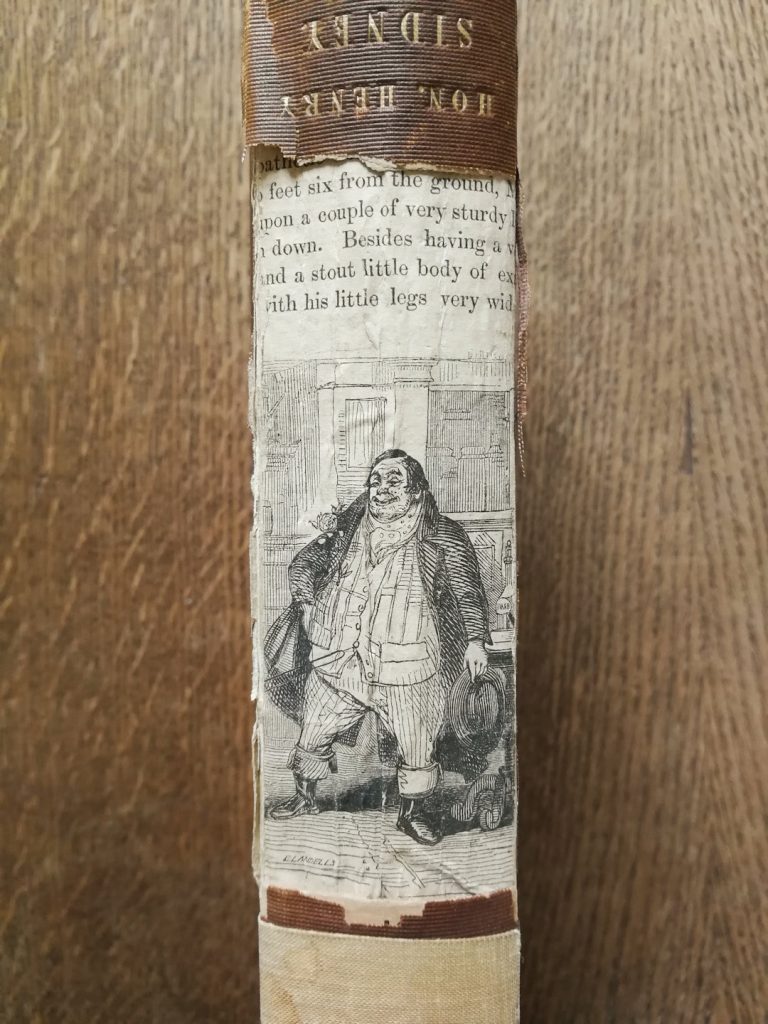 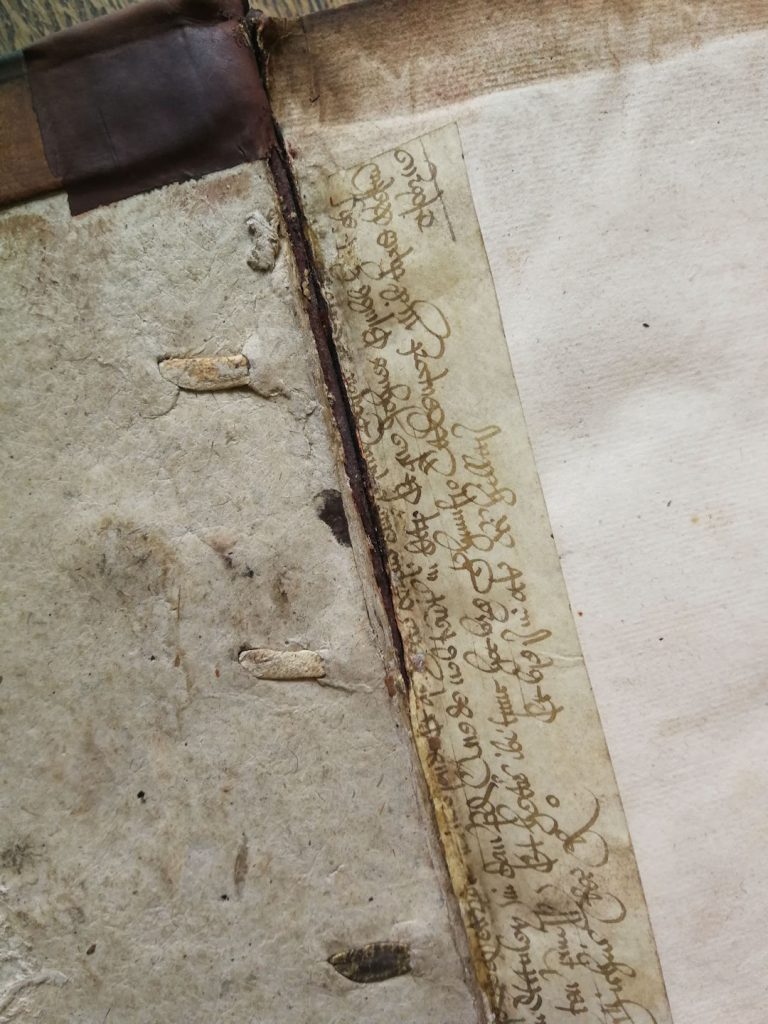 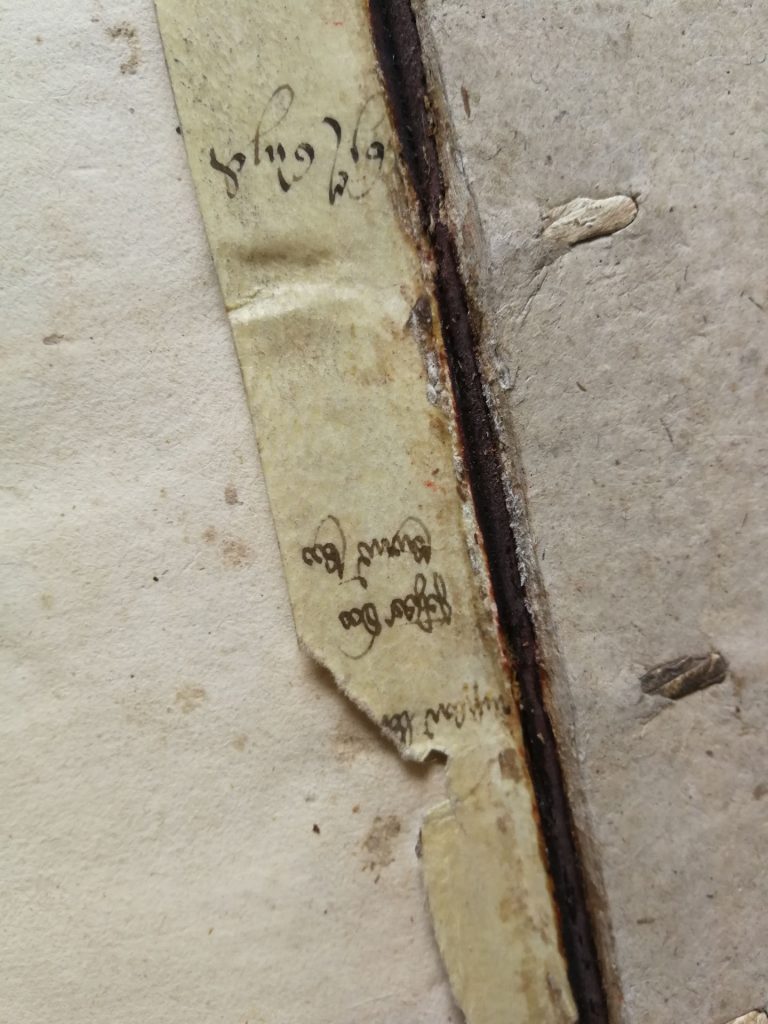 Whole sheets of manuscripts could be re-purposed as the endpapers of books, parts of bindings, and sometimes even as covering for the outer boards. Here, a piece of manuscript waste has been used within the binding, and is visible only as a tab on the inside joints of the book. The writing is in a 17th century ‘secretary hand’, probably written with a goose feather quill. Secretary hand was so called because it was learned by professional copyists, clerks and secretaries. The style of handwriting uses letter forms that are quite different to today’s forms, and writers in the Early Modern period would have used the 24 letter alphabet, rather than the 26 letter alphabet we are used to today. 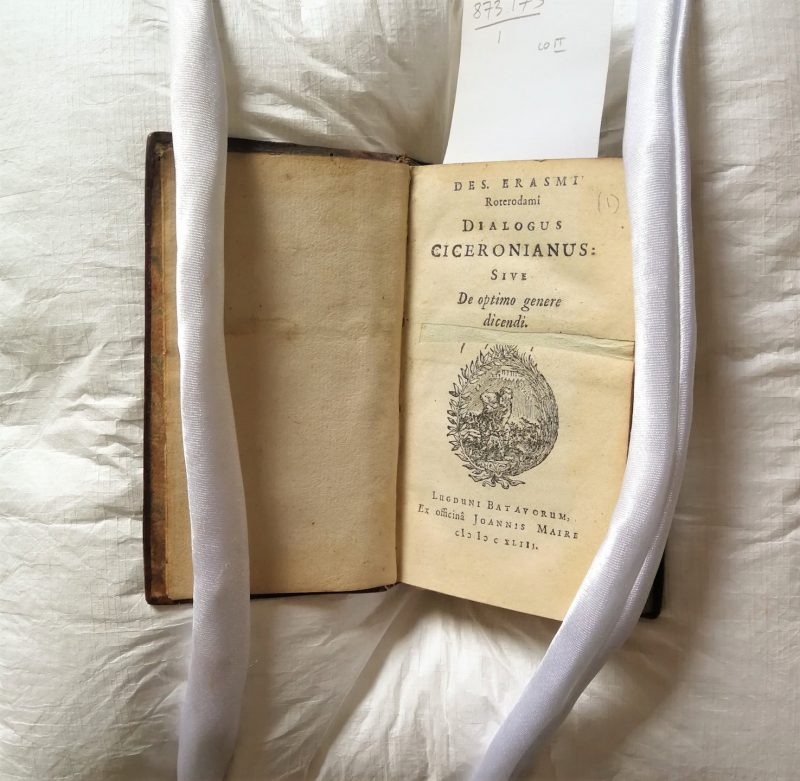 Inscriptions and bookplates showing a book’s ownership history, or provenance, are interesting to book historians and collectors now. However, this is relatively recent and some Early Modern book owners would cross, wash or even cut out marks of previous ownership when a book came into their possession.

Here, we can see two examples. In the smaller volume on the left, the new owner has cut out a pen inscription and patched the area with new paper. All that remains are the downwards strokes of some of the letters.

In the larger volume below, several large areas have been roughly removed, leaving no indication of what might have been there. 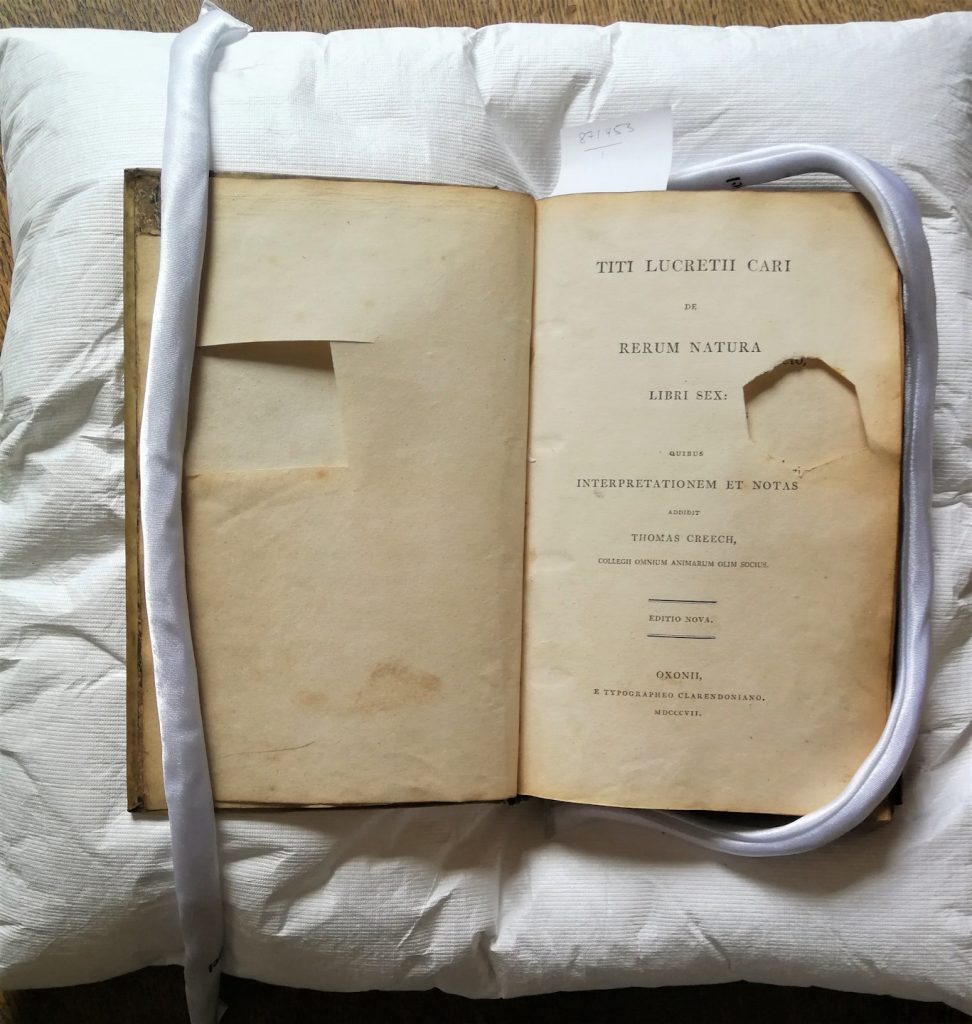 Before mechanised methods of papermaking made paper cheaply available, books provided a convenient source of paper for pen tests or other notes and doodles. The front and back of this book appear to have been used by at least two people for handwriting practice. The paler, spiky italic hand on the title page belongs to John Hine, who signs his name at the very beginning of the book and copies the headers of chapters in his own handwriting throughout. The large, darker ‘round hand’ script presumably belongs to Elizabeth Hine. This style of handwriting was often learned by children from copy books around the 1800s, and because of the size and guide lines we can assume Elizabeth might have been a child or younger relative of John’s.

There is also some evidence of pen testing on the upper flyleaf. The repeated squiggles and smaller speckle marks could be made by someone tapping the nib of a quill or pen into shape to adjust line thickness or to test the ink flow before writing further, similar to how modern writers doodle with a biro pen to get the ink flowing properly.

The lower endpapers are covered with writing in a similar ’round hand’ style to Elizabeth’s writing earlier in the book. These lines of writing have been gouged into the paper with the nib of a quill or pen, but this time no ink has been used, producing a ghostly effect. 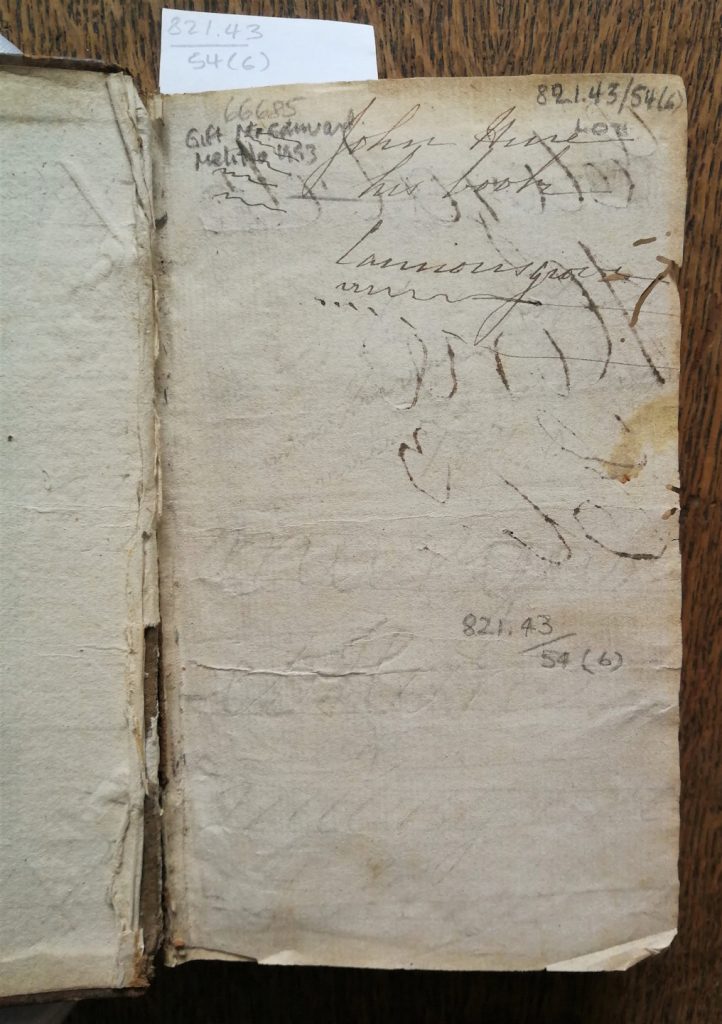 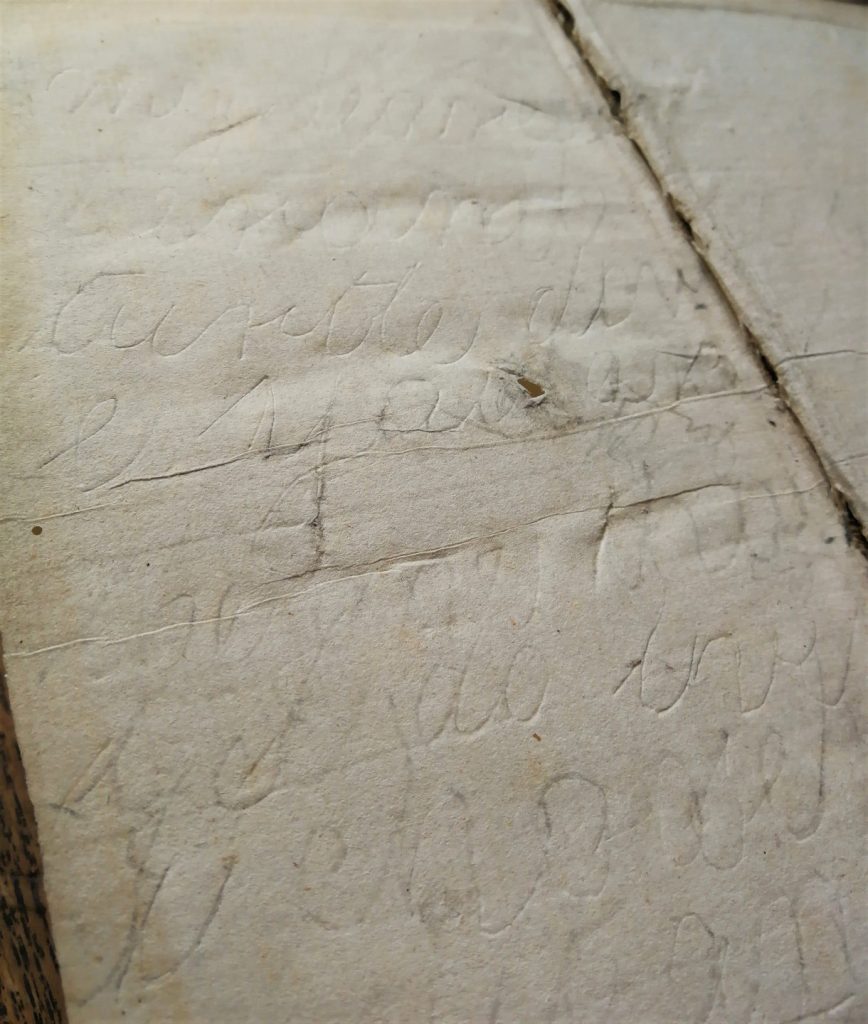 This exhibition was curated by Lauren Ward, Senior Library Assistant.