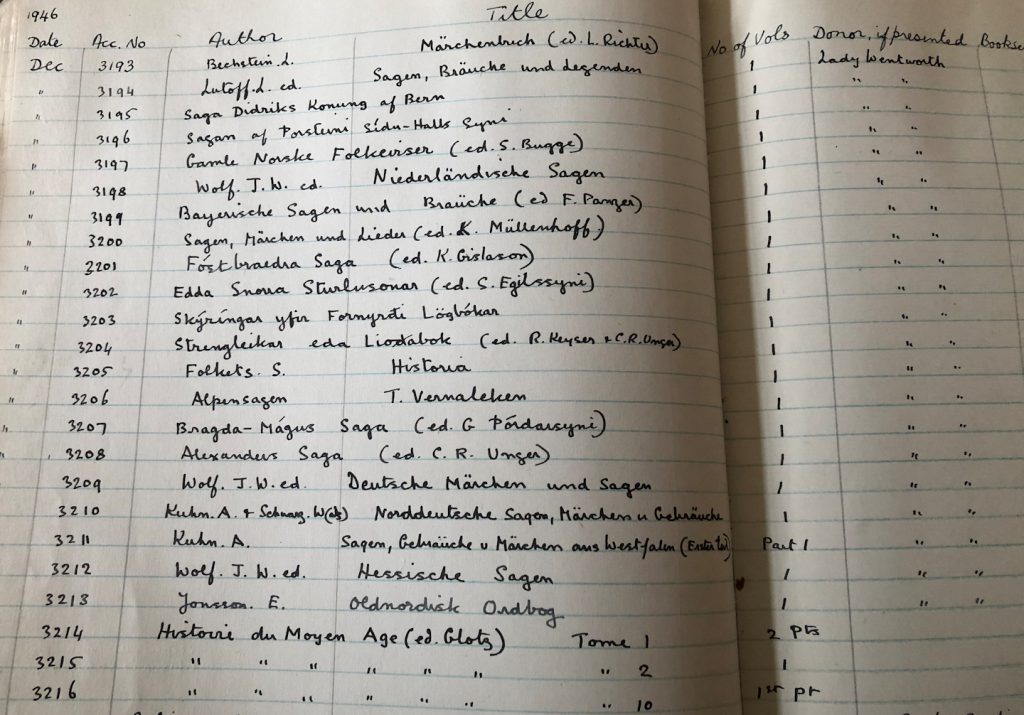 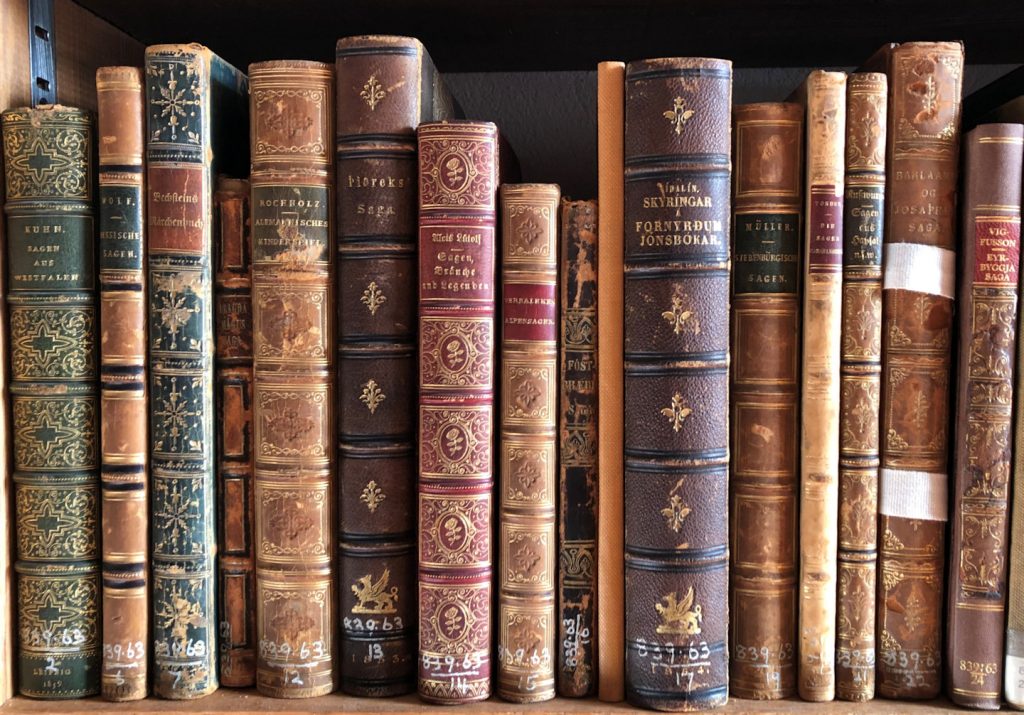 Judith Anne Dorothea Blunt-Lytton, 16th Baroness Wentworth, also known as Lady Wentworth (6 February 1873 – 8 August 1957) was the great-granddaughter of the poet Lord Byron and the granddaughter of mathematician Ada Lovelace.  She (Lady Wentworth) inherited the baronetcy from her estranged mother in 1917 and is perhaps best known as a breeder of Arabian horses.

The family library contained the papers and books of her ancestors, many of which were of interest to Byron scholarship.

There are few clues as to how or why, but Lady Wentworth became friendly with Mary Christabel ‘Christie’ Draper who was the librarian at St Anne’s between 1937 and 1960.  Christie’s father, William Henry Draper, was Master of the Temple (Temple Church) in London and an influential figure in his time who may have crossed paths with the Wentworth family.  In any case, Christie became a sort of literary helper to Lady Wentworth and when she died in 1957, Christie was listed among the attendees at her funeral and named as literary executor.

Although no books were left to the library in her will, 38 titles in the collection at St Anne’s bear the inscription ‘Presented by Lady Wentworth 1946’ and of these, some 35 are mid 19th century books concerned with folklore and saga of Northern and Germanic Europe.  It seems likely that Wentworth was disposing of books outside her interests and felt that St Anne’s could make better use of them.

The Second Earl of Lovelace

Many of these folklore and saga volumes carry the bookplate of Lady Wentworth’s uncle Ralph Gordon Noel King Milbanke, Second Earl of Lovelace & Thirteenth Baron Wentworth.  Born in 1839, he was the son of Ada Lovelace though she died when he was 13 and much of his childhood was under the control of his grandmother Annabella Milbanke, Lady Byron.  She kept him away from public schools and had him educated at home by private tutors until he was released to attend the then unfashionable University College in 1859.  Lady Byron died the following year and with his father remarried, Ralph no longer had a home to return to outside of term time.  When his application for a summer vacation residence at Oxford was turned down, he dropped out of the college in May 1860 and went travelling instead.

Ralph King-Noel, as he was then, spent at least a year in Iceland and around the same time changed his surname to Milbanke in accordance with his grandmother’s will.

At Thingvalla I saw a man in shabby garments, rather lame who came up to me and conversed in English with a foreign accent.  I congratulated him on speaking English so correctly.  He smiled but said nothing.  Not till after I left did I hear that he called himself Milbanke, and had been travelling in Iceland the foregoing year when, on reaching Grimstunga, he tripped on a lava-field, fell and dislocated his thigh.  He was nursed at the pastor’s manse by the pastor’s daughter, and he fell desperately in love with her, and remained at Grimstunga through the winter to prosecute his suit.

The wooing of the pastor’s daughter was fruitless, as she was already quite taken with a young local man.

Ralph’s elder brother died in 1862 and he ended his travels to take up his inherited seat in the House of Lords as Baron Wentworth.  Thanks to the path of inheritance he was in the unusual position of sitting at the same time as his father, the Earl of Lovelace.

Just one of the books bears any note or inscription.  Ludwig Bechstein’s Märchenbuch, a German volume of fairy tales is labelled “London. Friday. November 30, 1855”. Does this mark a 16 year old Ralph’s first entry into an enthusiasm for saga and myth? The latest publication date of any of the saga and folklore books in the collection is 1865 and after this date, it seems that his academic focus turned towards researching and gaining control of Byron family papers.  The books then, might represent a ten year period of academic hobbying or a boyish fascination with myths that was somewhat dispelled by a trip to the North that included heartbreak and injury.

For the next forty years as Baron Wentworth, Ralph continued to be a keen mountaineer but did most of his travelling in mainland Europe and particularly the Alps, setting at least one climbing record for the Alpine Club.

Lord Lovelace died very suddenly on Tuesday night at Ockham-park, Ripley, his seat in Surrey.  He was passing from the drawing-room to the verandah, when he fell to the ground without warning and died immediately.  To all appearances he was at the time in perfect health.

At his funeral, the casket was topped with sprays of Alpine thyme and gentian.

One of the first things to note about the bookplate is that it is dated 1907, the year after Ralph’s death.  The initials ‘E.H.N.’ outside the lower right corner belong to Edmund Hort New, a well regarded bookplate artist who designed plates for St Hilda’s College Library, The Vere Harmsworth Library and many individuals in and around Oxford.  New’s image for Ralph’s plate was commissioned by his widowed second wife (Mary Caroline Wortley) and shows a shield quartered with the arms of Milbanke, King, Byron and Noel on a background of beech leaves.  The motto ‘PENSEZ A BIEN’ translates to ‘think on good’ and the mountain range in the background is undoubtedly an allusion to his mountaineering interests.  Two sizes of the plate were produced (though only the smaller exists in our collection at St Anne’s) and an artists error can be seen in the squashed ‘XIIIth’, correcting a mistaken twelve to thirteen.

A list of titles in the Wentworth gift can be found by carrying out an ‘Advanced Search’ on SOLO.

“Lovelace, Ralph Milbanke, Earl of, 1839-1906” for volumes which also carry the bookplate.