We are delighted to announce that St Anne’s College Fellow, Professor Sir Peter Donnelly, has been awarded the Genetics Society Medal 2020 in recognition of his work on statistical and population genetics.

Peter has been Professor of Statistical Science at the University of Oxford and a Professorial Fellow of St Anne’s College since 1996. He is also an Honorary Fellow of Balliol College, where he completed his DPhil as a Rhodes Scholar. He is a Fellow of the Royal Society and for ten years he was the Director of the Wellcome Centre for Human Genetics. He is now also the Chief Executive Officer of Genomics plc, a spin out company he co-founded in 2014 with the aim of harnessing genomic data to transform healthcare. He was awarded a knighthood in this year’s Queen’s Birthday Honours.

With the College’s then-Principal, Tim Gardam, Peter established the Centre for Personalised Medicine, a partnership between St Anne’s College and the University of Oxford’s Wellcome Centre for Human Genetics. He continues to co-chair the Steering Group for the Centre, which is a communication and engagement vehicle for students, academics, clinicians and the public to explore the benefits and challenges of Personalised Medicine.

The award of the Genetics Society medal recognises ‘seminal contributions’ made by Professor Donnelly, alongside colleagues Myers and McVean, to our understanding of meiotic recombination. Following Alec Jeffreys’ discovery of recombination hotspots in humans, the group developed sophisticated computational methods to infer hotspot locations from genetic variation data. They produced genetic maps in humans at unprecedented kilobase scales and identified ~30,000 recombination hotspots where only ~15 were previously known. They also identified recombination hotspots in chimpanzees and showed that, in spite of 99% sequence identity between the species, the hotspots were in different positions. Next, they identified a DNA sequence motif responsible for localising crossovers in humans, the first such motif to be identified in any species. Along with two other groups internationally they identified the protein, PRDM9, responsible for positioning crossovers. Prdm9 is also the only known speciation gene in mammals. Donnelly and Myers recently characterised the molecular mechanisms underpinning its role in hybrid infertility. 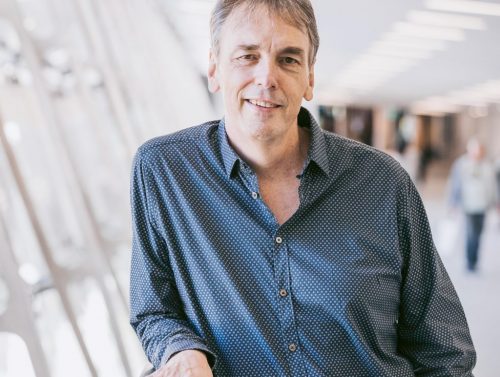