Home • News • Prof. Patrick Irwin works with NASA to produce video simulation of what an instrument might see as it enters Uranus’s atmosphere

NASA Goddard Space Flight Center (GSFC) is working on a new instrument, the Advanced Ice Giants Net Flux Radiometer, for possible inclusion in a future atmospheric entry probe to Uranus, launching in and around the 2030s. Such an instrument, mounted on the probe, would observe the Uranian sky above, below and to the side of the probe as it parachutes down through the atmosphere. Its aim? To measure where in the atmosphere solar and thermal radiation is emitted or absorbed by measuring the difference between the upwards and downwards flux in seven different spectral filters. In collaboration with Dr Shahid Aslam, Dr Conor Nixon and several others at NASA/GSFC, Professor Patrick Irwin, Professor of Planetary Physics and Tutorial Fellow at St Anne’s, has been modelling what the instrument might see and what selection of spectral filters will optimise the science return.

What would a human observer see?

‘While working on a proposal for the instrument, I got to thinking about what a human observer might see if they were to follow the probe down into Uranus’s atmosphere and it gave me the idea to simulate that in a video,’ explains Professor Irwin. 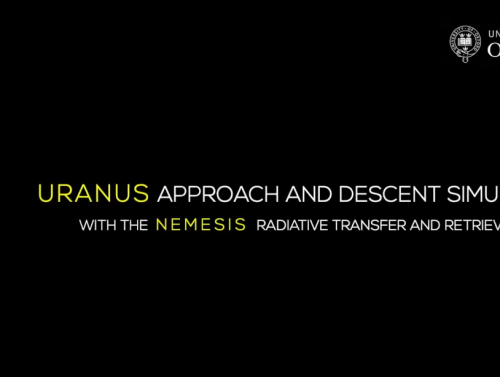