We are delighted to announce that the Governing Body of St Anne’s College has elected three new Honorary Fellows: alumna Amanda Pritchard (Modern History, 1994), Chief Executive of NHS England; entrepreneur Tom Ilube CBE, who has worked closely with St Anne’s as an Advisory Fellow for the past three years; and Denis Feeney, Giger Professor of Latin at Princeton University. All three have accepted their Fellowships, and we believe their unique knowledge, experience and commitment to values shared by College will help us in our ambition to understand the world and change it for the better.

Since becoming an Advisory Fellow, Tom has been instrumental in advising and supporting the College as we strive to create a diverse and inclusive community that will contribute to the University’s vision to lead the world in education and research. Tom has spoken at many St Anne’s events and helped to connect College with many people and organisations whose values align with ours.

Tom Ilube became Chair of the RFU (Rugby Football Union) on 1st August 2021. He has had a 30-year career in the UK technology sector including roles at PwC, Goldman Sachs and the London Stock Exchange. He was Chief Information Officer at Egg Banking plc, the UK’s first internet bank, founded venture capital backed tech start up Garlik which was acquired by Experian and was an MD of private equity backed Callcredit (now TransUnion). In 2014 Tom founded Crossword Cybersecurity Plc where he remains CEO of the AIM London Stock Exchange listed company. Tom was the Founding Chair of Hammersmith Academy, the UK’s first digital and creative media academy, and has been a Governor of several secondary schools from Darwen in Lancashire to Brighton in Sussex. He is also Chair of the African Science Academy, Africa’s leading all-girls science and technology school. Tom has been a Non-Executive Director of the BBC since 2017. In 2017, he was ranked first in the Powerlist, an annual listing of the UK’s 100 most powerful people with African or Afro-Caribbean heritage. In 2018 he was awarded a CBE for services to technology and to philanthropy and he became a Non-Executive Director of FTSE100 global advertising agency WPP plc in 2020.

On his election, Tom said: “I am delighted to accept the offer of an Honorary Fellowship from St Anne’s College. Over the past three years, I have worked closely with St Anne’s in the capacity of Advisory Fellow, developing a strong relationship which I look forward to continuing as I move into this new role.”

In appointing Tom Ilube to an Honorary Fellowship, we hope to celebrate not only his personal achievements but also the invaluable support he has offered to St Anne’s College.

Amanda Pritchard was recently appointed Chief Executive of NHS England, having enjoyed a very successful career in healthcare and public policy since leaving St Anne’s with a degree in Modern History in 1997. She is the first woman in the health service’s history to hold the post as Chief Executive of NHS England, an organisation whose staff are more than three quarters female. The NHS is one of the largest employers in the world, the biggest in Europe, employing over 1.3 million staff. In her role Amanda will be responsible for an annual budget of more than £130 billion while ensuring that everyone in the country receives high quality care.

Amanda has long been a friend of St Anne’s and came to Oxford from Durham Johnston Comprehensive School, in our Outreach and Access link region of the North East. The North East is disproportionately underrepresented at Oxford and Amanda’s trajectory is one we hope may inspire students in our link region as we seek to further increase the diversity of our student body.

On her election, Amanda said: “I look back on my time at St Anne’s with incredible fondness.  My three years at Oxford are the platform for everything that I have done since: the academic stretch; the friendships made; and of course the confidence and wider experiences that the College and University offer. I therefore am delighted to accept the offer of an Honorary Fellowship of the College.”

In nominating Amanda as an Honorary Fellow, we hope to celebrate her achievement in becoming the first woman to be appointed to her key role, but also to acknowledge, in some small way, the selfless work of all NHS staff during the pandemic.

Prof. Feeney has a longstanding and affectionate relationship with the Classics School at St Anne’s (most recently he was our guest lecturer in Michaelmas Term of this year). His works are very well known and popular with our undergraduate and graduate students and he is without doubt one of the most eminent Classical scholars of his generation.

In the course of his career Prof. Feeney has held Chairs at the Universities of Wisconsin and Bristol as well as Princeton and was offered both the Corpus Professorship of Latin at Oxford and the Kennedy Professorship of Latin at Cambridge. He has served as President of the Society for Classical Studies, as Sather Lecturer at UC Berkeley, and as both Syme Lecturer and Fowler Lecturer in Oxford. He is best known for his monographs The Gods in Epic (Oxford, 1991), Literature and Religion at Rome (Cambridge, 1998), Caesar’s Calendar (Berkeley, 2007), and Beyond Greek: the Beginnings of Latin Literature (Cambridge Mass., 2016), but he also has a string of seminal articles to his name. He remains an active researcher and thinker about Latin literature and Roman history.

In 2016 Prof. Feeney was elected a Corresponding Fellow of the British Academy and a Member of the American Academy of Arts and Sciences.

Prof. Feeney’s commitment to the undergraduate Humanities Sequence at Princeton means that he has taught with colleagues across a wide range of disciplines and lectured on authors well beyond the ancient world.

On his election, Prof. Feeney commented, “I was thrilled to hear of my election to an Honorary Fellowship.  This means a great deal to me, and I look forward very much to joining in the life of the College to the extent that I am able, once I’ve retired from Princeton and returned to England in December this year.  I am very touched by this honour.” 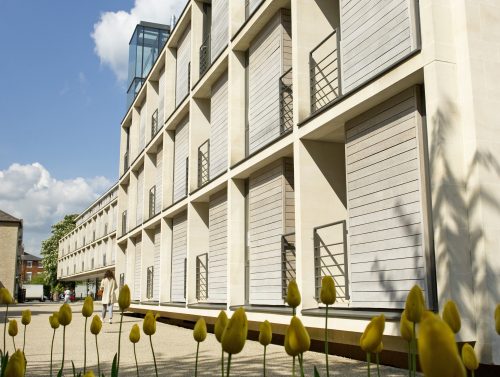