Elephants’ heavy footsteps and their rumbling low-frequency calls are so powerful that they can create seismic waves—vibrations that travel through the ground and along its surface. As a result, elephants have evolved sensitivity to these ground-traversing sound waves, in part because it because it helps them communicate with one another across thousands of metres. The animals have an inner ear, as well as pressure-sensitive nerve endings in their feet called Pacinian corpuscles, and scientists believe that these help them detect seismic vibrations.

Now, researchers at the University of Oxford, led by St Anne’s Junior Research Fellow Dr Beth Mortimer, have worked with Save the Elephants to find evidence that African elephants (Loxodonta africana) also listen and react to ground vibrations created by human activity. The study, published today in the Proceedings of the Royal Society B, shows that when elephants perceive such human-generated seismic waves, they often retreat away from them, apparently as a risk-avoidance strategy.  Previous studies have found they avoid the acoustic sounds of bees, tiger growls, human voices, and other elephants’ alarm calls. But whether they could also identify and discriminate between different ground-based sounds was unclear.

Conservationists are concerned that man-made noises may interfere with signals that elephants receive from the natural world and impact their survival.  A profusion of low frequency noise is a particular concern in Samburu, where this study was carried out, since it is close to an artillery firing range. Elephants may also be sensitive to seismic blasting for oil exploration, which is currently taking place in Kavango in Namibia.

To study how they detect and respond to seismic waves generated from different sources, Dr Beth Mortimer, her colleagues and a team from Save the Elephants played seismic recordings of elephants and human-generated white noise, as well as a combination of both, to wild elephants in Samburu National Reserve and Buffalo Springs National Reserve in northern Kenya.

“Human-generated seismic noise is something the elephants were retreating from,” Dr Mortimer said. “That leads us to the conclusion that they’re associating it with risk. We don’t know why—there could be many reasons that they’re choosing to retreat.”

Human-generated noise pollution is ubiquitous—and it is only increasing, along with human activity. “The more of it there is, and the louder and closer it is, the more it’s going to be affecting the elephants,” Dr Mortimer said. Even in the relative tranquility and remove of protected areas such as the National Reserves, the ground carries human-generated noise from vehicles, generators, gunfire, and other sources, which according to the new study’s findings could be enough to disrupt elephants’ behaviour.

“We’ve shown through this study that elephants can detect and respond to human-generated vibrations,” Dr Mortimer said. “We observed the retreat response to such noise, and so we know that human noise poses challenges to elephants because they are so sensitive to ground-based vibrations.”

Ultimately, Dr Mortimer says more research is needed to understand how human-generated vibrations affect their welfare. “This study helps show that elephants use seismic vibrations for a wider variety of information—not just communication,” she said. “We know that seismic vibrations are only going to increase over time, and we need to be aware of how that is impacting elephants.”

Chris Thouless, Save the Elephant’s Head of Research says: “We still know very little about how elephants use infrasound to communicate with each other and to appreciate their environment. They operate in a sensory world that is very different from our own, ‘hearing’ low frequency noises through their feet. They may detect other elephants, distant thunderstorms, and noises of human activities at great distances. This skill helps them to survive in a complex environment, but man-made noises may overwhelm the more subtle signals from the natural world.”

Key findings from the study include:

Watch this short film on how the data for the study was gathered: https://youtu.be/gQe4DR9vcUg 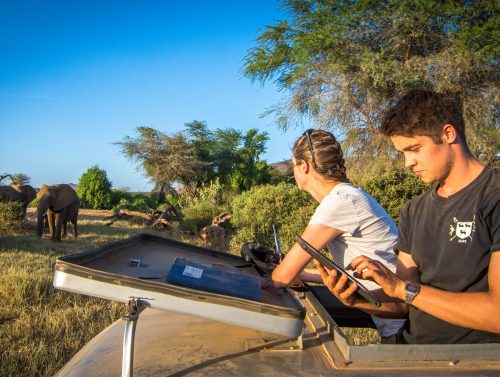