Home • News • The Death of Her Majesty Queen Elizabeth II

St Anne’s College is deeply saddened to learn of the death of Her Majesty Queen Elizabeth II, whose seven decades of public service have included many close ties with the University of Oxford and with St Anne’s itself.

Although the Society of Oxford Home-Students was established in 1879, it took formal permission from the University and a royal charter signed by Her Majesty the Queen in 1952 for the St Anne’s Society to be incorporated as St Anne’s College, Oxford. The signing of this charter on 29th April, 1952, was one of the first acts performed by the new Queen Elizabeth after her accession to the throne.

In 1960, the Queen visited St Anne’s to formally open our new Dining Hall. An observer wrote: “A young tabby cat had found [the red carpet], and lay curled in the Queen’s path, wondering, no doubt, what kind chance had guided it to such a haven on a bleak November afternoon.”

We are grateful to the Queen for a lifetime’s devotion to the nation, during a reign which began in tandem with our own beginnings as a full College of the University – an indication of the enormous social change Elizabeth II would oversee. The Union Jack at St Anne’s will fly at half-mast in line with protocol. 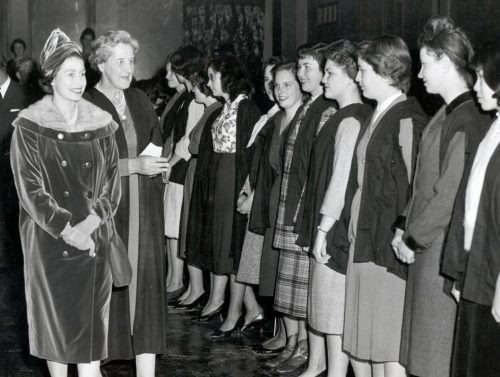