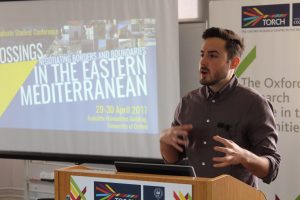 Please briefly introduce yourself and what you are currently doing

My name is Daniele Nunziata, I am a Stipendiary Lecturer in English Literature and I teach Victorian and modern literatures from 1830 to the present. This involves tutoring two of the Prelims Papers. The texts included in these classes span from Victorian life-writers (such as Mary Prince and Frances Harper), to Modernist and Harlem Renaissance poets (including Hilda Doolittle and Langston Hughes), to twentieth-century novelists (from Chinua Achebe and Sam Selvon, to Jamaica Kincaid and Andrea Levy). I also incorporate a large amount of literary theory into my teaching, including the writings of Edward Said and Gayatri Spivak.

I supervise dissertations by undergraduate finalists and by postgraduate students studying for the MSt in World Literatures in English. I also fill the role of Personal Tutor for some English (or English and Modern Languages) students.

In terms of research, I have recently published a monograph entitled Colonial and Postcolonial Cyprus: Transportal Literatures of Empire, Nationalism, and Sectarianism. It examines literary representations of the island before and after its independence from the British Empire. The book asks questions about the kinds of linguistic, cultural, and political identifications writers make through their texts. I am interested in unpacking the relationship Cyprus has with the categories of ‘postcolonial literature’, ‘world literature’, and ‘Middle Eastern literature’ – as well as its cultural connections with Greece, Turkey, and the UK.

When did you join St Anne’s and how have you found your time at the College?

I joined St Anne’s in 2018 and have always found it a hugely welcoming environment. The College places as much value on the intellectual rigour of its research output as it does the personal and pastoral development of its individual members. It is an honour working with students and other members of staff here. I thoroughly enjoy teaching modern literature. Every week, I look forward to reading my students’ essays and hearing their observations during seminars and tutorials. The College began to feel like home as soon as I first arrived, and I hope I have been able to make newer members of the St Anne’s family feel the same way over the last couple of years!

What is your favourite place in Oxford?

At the risk of repeating stereotypes and clichés about my field – some of my favourite places in the city are its libraries! There are so many fantastic spaces in which to read and study, from the St Anne’s and English Faculty libraries, to the central buildings of the Bodleian including the Radcliffe Camera. The Commonwealth and African Collections have been a particularly important resource when researching global literary contexts. Being surrounded by the textual voices of centuries-old writers always helps inspire my own thinking.

What is your specialist subject and how did you become interested in this area?

I specialise in postcolonial literature. It is a field I first began to study as an undergraduate in English at Queen Mary, University of London. I then joined the very first year of the MSt in World Literatures in the Oxford Faculty of English which continued to nourish my thinking. I am immensely grateful to the academics who launched this unique postgraduate course and who have been tirelessly championing postcolonial literary studies for decades. As a consequence, I am now passionate about translating the skills and ideas I learnt as as student into my own teaching. I hope to introduce new students to the wonderful possibilities – and ethical responsibilities – of studying postcolonial writing.

The postcolonial field encourages us to think transnationally and to explore the cultural and political ramifications of imperialism, nationalism, and the social inequalities created by these forces. I first wanted to participate in this study because my maternal family comes from Cyprus, a British colony until 1960. Obviously, this has informed the subject of my recent book, and it shows the intersections between my personal and professional interests. Growing up, I could see the impact of colonialism and the partition of Cyprus on my family – many of my relatives became refugees in 1974 – and I wanted to examine how literature can offer agency in response to these crises.

Have you found any challenges working in academia? If so, how have you overcome them?

There are definitely many challenges within academia. As I’ve already hinted to, academia is something that is a part of my identity now – and it can sometimes be difficult to separate my work from the rest of my life. There are very few days when I’m not doing something related to my research. This is especially so because I study material which is closely tied to my familial and cultural background. I relish the absolutely incredible opportunities this gives me. But I am also aware of the importance of trying to achieve a so-called work-life balance. I’m not always successful at doing this, but it’s something I aim towards!

There are also larger structural and systemic issues with the ways in which some fields of research – including that of postcolonial literature – can be marginalised by many institutions across the globe. I am very fortunate to be a member of St Anne’s and the Oxford Faculty of English, spaces which celebrate literary diversity and welcome the study of transnational and multilingual literatures. However, more work needs to be done across the world to move beyond certain ‘canons’ and to decolonise curriculums. These are issues I am constantly thinking about when it comes to organising my teaching. Initiatives based at the College, including the Anti-Racist Teaching Discussion Space, have been vital for this. Reform on an institutional scale often begins with critical self-reflection

What is your favourite way to relax?

I don’t have a particularly exciting response beyond the obvious answer of reading! Spending time with family and friends is very important. I also write poetry. I was surprised and delighted to receive a Commendation from the SciPo Poetry Competition in 2020. This has encouraged me to keep writing and to share my words with others, even though it can be a daunting prospect.