Congratulations to Dr Eleni Philippou, Postdoctoral Research Fellow at OCCT and the Principal Investigator of the Prismatic Jane Eyre Schools project, on the publication of her monograph, Speaking Politically: Adorno and Postcolonial Fiction.

In this monograph, Theodor Adorno’s philosophy engages with postcolonial texts and authors that emerge out of situations of political extremity – apartheid South Africa, war-torn Sri Lanka, Pinochet’s dictatorship, and the Greek military junta. This book is ground-breaking in two key ways: first, it argues that Adorno can speak to texts with which he is not historically associated; and second, it uses Adorno’s theory to unlock the liberatory potential of authors or novels traditionally understood to be “apolitical”. While addressing Adorno’s uneven critical response and dissemination in the Anglophone literary world, the book also showcases Adorno’s unique reading of the literary text both in terms of its innate historical content and formal aesthetic attributes. Such a reading refuses to read postcolonial texts exclusively as political documents, a problematic (but changing) tendency within postcolonial studies. In short, the book operates as a two-way conversation asking: “What can Adorno’s concepts give to certain literary texts?” but also reciprocally, “What can those texts give to our conventional understanding of Adorno and his applicability?” This book is an act of rethinking the literary in Adornian terms, and rethinking Adorno through the literary.

Beyond her key research interests in postcolonial and world literature, Eleni is also interested in critical theory, comparative literature, and translation studies. She is an award-winning poet, with a number of poems published in both British and international anthologies and journals.

To celebrate the publication, the OCCT is hosting an online book launch, which all are warmly invited to attend. Join Eleni in conversation with St Anne’s Stipendiary Lecturer in English, Dr Daniele Nunziata, on May 17 at 1pm (online) as she discusses the new work. Find further information, and joining instructions, here. 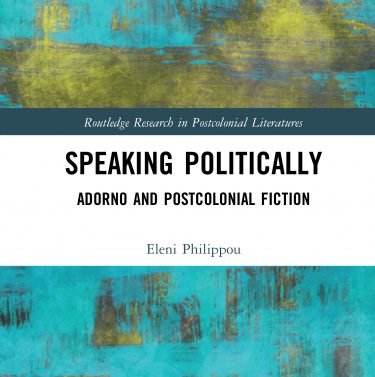