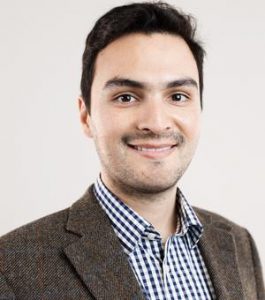 Sebastian received a Bachelor’s degree in Electrical and Electronics Engineering from Universidad de los Andes, Colombia, 2008. He later interned for the CERN in Geneva, Switzerland, 2008, and for Asylum Research, 2009. He completed an MPhil degree in Micro and Nanotechnology at the University of Cambridge, UK in 2010. He was a lecturer in Electronics at Universidad de los Andes in 2010-2011. He later completed a Doctorate in Materials in the Semiconductors Group funded by a Clarendon Scholarship, 2015, researching novel methods to maximise surface passivation for silicon solar cells. After, he was awarded an EPSRC Postdoctoral Research Fellowship to deepen the understanding and advance industrial deployment of new methods of silicon surface passivation. At the same time he became Junior Research Fellow at Wolfson College, Oxford. From 2019 he is a Royal Academy of Engineering Research Fellow in the Oxford Materials Department. From 2021 he is a Stipendary Lecturer in Materials Science at St Anne’s College, Oxford.