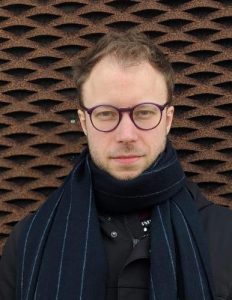 Robert is one of the organisers of the Michael Dillon LGBT+ Lectures, held at St Anne’s and run in partnership with the University of Oxford and the charity GiveOut. During the first coronavirus lockdown he chaired the popular Oxford Renaissance Online Seminar (OROS) out of St Anne’s (more details available here: https://www.st-annes.ox.ac.uk/this-is-st-annes/about-us/the-oxford-renaissance-online-seminar/). In the 2020-1 academic year, he served as the University’s Junior Pro-Proctor.

Robert is not teaching at present, due to the award of a Leverhulme Early Career Research Fellowship.

Robert is a Shakespearean and early modernist whose principal research interests are in literary form, ranging from prosody (rhyme, metre, rhythm) to verse structures (blank verse, the sonnet). His main affiliation at the present is to The Shakespeare Institute in Stratford-upon-Avon, where he is a Leverhulme Early-Career Research Fellow..

His first book Shakespeare’s Blank Verse: An Alternative History will be published in 2022 by Oxford University Press. He is now at work on another book, provisionally titled Forms of Desire: Sex and the Sonnet in Early Modern Europe, as well as a series of articles.

He has published articles in The Review of English Studies (about blank verse ‘bombast’), Shakespeare Survey (about supernatural metre), Essays in Criticism (about bathos) and Studies in Philology (about feminine rhyme and boy actors). He has also published peer-reviewed chapters in three edited collections, The Edinburgh Companion to Literature and Music (ed. Delia da Sousa Correa), Reading the Road: Shakespeare’s Crossways to Bunyan’s Highways (ed. Lisa Hopkins and William Angus), and Humorality in Early Modern Art, Material Culture, and Performance (ed. Kaara Peterson and Amy Kenny). The first is a short polemic against the notion of a ‘music of poetry’, the second is about the problem of representing pedestrian travel onstage, and the third is about versification and the humors. He has a further chapter forthcoming in The Oxford Handbook of Sir Philip Sidney (ed. Catherine Bates) which traces the intellectual and continental history of Sidney’s versification, and he is editing a special issue of the British Shakespeare Association’s journal Shakespeare which is titled ‘Shakespeare and Versification’. Finally, he sometimes reviews new books on Shakespeare and early modern literature for The Times Literary Supplement and a number of academic journals.

Robert has received major (1-3 year) research funding from the Leverhulme Trust, the Wolfson Foundation and the Arts and Humanities Research Council. He has been awarded research fellowships including a Berlin Sessions Visiting Fellowship in (unsurprisingly) Berlin (2020); a Pforzheimer Visiting Research Fellowship at the Harry Ransom Center in Austin, Texas (2019); a Wolfson Visiting Research Fellowship at the New York Public Library (2017); a Tom Jarman Research Fellowship at Gladstone’s Library in Hawarden (2017); and a Jubilee Education Fund grant to research in the Royal Shakespeare Company archives in Stratford-upon-Avon (2015). His postgraduate research won Oxford’s Charles Oldham Shakespeare Prize for best masters/doctoral work on a Shakespearean subject, and he recently received an ‘honourable mention’ (runner-up award) in the London Renaissance Seminar’s inaugural ‘Contribution Awards’ for “outstanding contributions to the field of the Renaissance”.

He has written, produced and presented a fully-funded feature-length documentary about Shakespeare’s early career in Shoreditch (‘Shoreditch: Shakespeare’s Hidden London’), and has worked with a number of theatre companies on Shakespeare productions and festivals. Recently, he has been appointed to the Arden Shakespeare advisory board as one of the first Arden Fourth Series Fellows, working with the general editors and individual volume editors to shape the future direction of this prestigious series.

Forms of Desire: Sex and the Sonnet in Early Modern Europe. In preparation.

‘Rhyme’s Voices: Hearing Gender in The Taming of the Shrew‘, forthcoming, Studies in Philology, 2022.

‘Wordsworth, Pope, and Writing After Bathos’, Essays in Criticism, 2014.

‘Against “the music of poetry”‘, in The Edinburgh Companion to Literature and Music, ed. Delia da Sousa Correa (EUP), 2020.