St Anne’s historical archives are housed within the College Library. The collection includes documents relating to the early years of women’s education in Oxford, particularly the campaign for degrees for women at Oxford, as well as the history of the College. This material is listed under 9 main sections below. The archives would be of interest to anyone researching women’s history, particularly with regard to higher education

We also hold some of the papers of former St Anne’s Fellows, including Marjorie Reeves and Annie Barnes. There is also a collection of artistic depictions of Saint Anne. This material is largely uncatalogued.

General archive enquiries can be addressed to Clare White (Librarian & Archivist) at clare.white@st-annes.ox.ac.uk

Applications to visit the Library and consult the Archive should be made using the form at the bottom of this page.

J 1/1. Letters and cuttings on the degree question. 1886-1896.
J 1/2. Degree question 1892-1896. Red box-file of papers with list of contents.
J 1/3 (1,2,3). 1. Folder containing drafts of the text of “Bertha Johnson – a portrait” (the illuminated
book in the Main Library display case) and correspondence connected therewith. 2. Original drawing
for the borders on frontispiece and title page. 3. Framed copy, in its border, of the photograph used
for the frontispiece.
J 3/1. Papers on AEW crisis 1896 and finance 1897.
J 3/2. Regulations for Bertha Johnson loan fund.
J 4/1. Speeches and papers by Mrs Johnson 1887-1923.
J 6/1,2. 1. Photograph album of past students presented to Mrs Johnson on her retirement in 1921.
2. List of students contributing.
J 6/3. Letters on Mrs Johnson’s retirement etc.
J 7/1. List of contributors to the B.J. Johnson Scholarship on her 80th birthday. 1926.
J 7/2. Letters concerning the B.J. Johnson scholarships.
J 7/3. Notes for the Hebdomadal Council on the B.J. Johnson scholarship.
J 7/4. Photograph of Mrs Johnson, aged 80, taken 1926 (the year in which the B.J. Johnson
scholarship was instituted). It appears in the Ship.
J 8/1. Letters to Mrs Johnson from past students – their prospects after schools.
J 8/2. Assorted letters, including one about the Cassel gift and one to Gabriel Woods. Also one from
Mrs Johnson to Naomi Mitchison dated Sept. 18 1916 (given by Lady Mitchison June 1990).
J 8/5,6. Letters about Mrs Johnson after her death.
J 8/7. Press notices of the funerals of the Rev. A.H. Johnson and of Mrs Johnson (they died within 4
months of one another).
J 9/1. Notes on her father by Mrs Johnson.
J 9/2. The visit of Queen Mary, 1921.
J 9/3. Mrs Johnson’s notes for the memorandum submitted by the women’s colleges to the Royal
Commission on Oxford & Cambridge 1920. Also other related papers.

A.E.W. (Association for Promoting the Higher Education of Women in Oxford)

AEW 1/1. AEW. Complete set of annual reports 1879-1920.
AEW 1/2. Home-Students Committee. Standing orders. (Home Students Committee of AEW was
governing body of Home-Students).
AEW 2/2. Original photo of AEW office and Miss Bonner’s letter. 1898.
AEW 3/1. Rules of discipline reported on in 1909 (when the delegacy for Women Students was being
planned).
AEW 3/2. Papers concerning the setting-up of the Delegacy for Women Students 1908-1910.
AEW 5/1. AEW papers. Catalogued on envelope.
AEW 5/2, 2B. 2. Letter to Miss Hadow from Mrs Lane Poole (Rachel Poole) about the early days of
the AEW. 2B. Letter to Miss Butler from Mrs Lane Poole about the inscription to be put on her
portrait, and various drafts of the inscription. 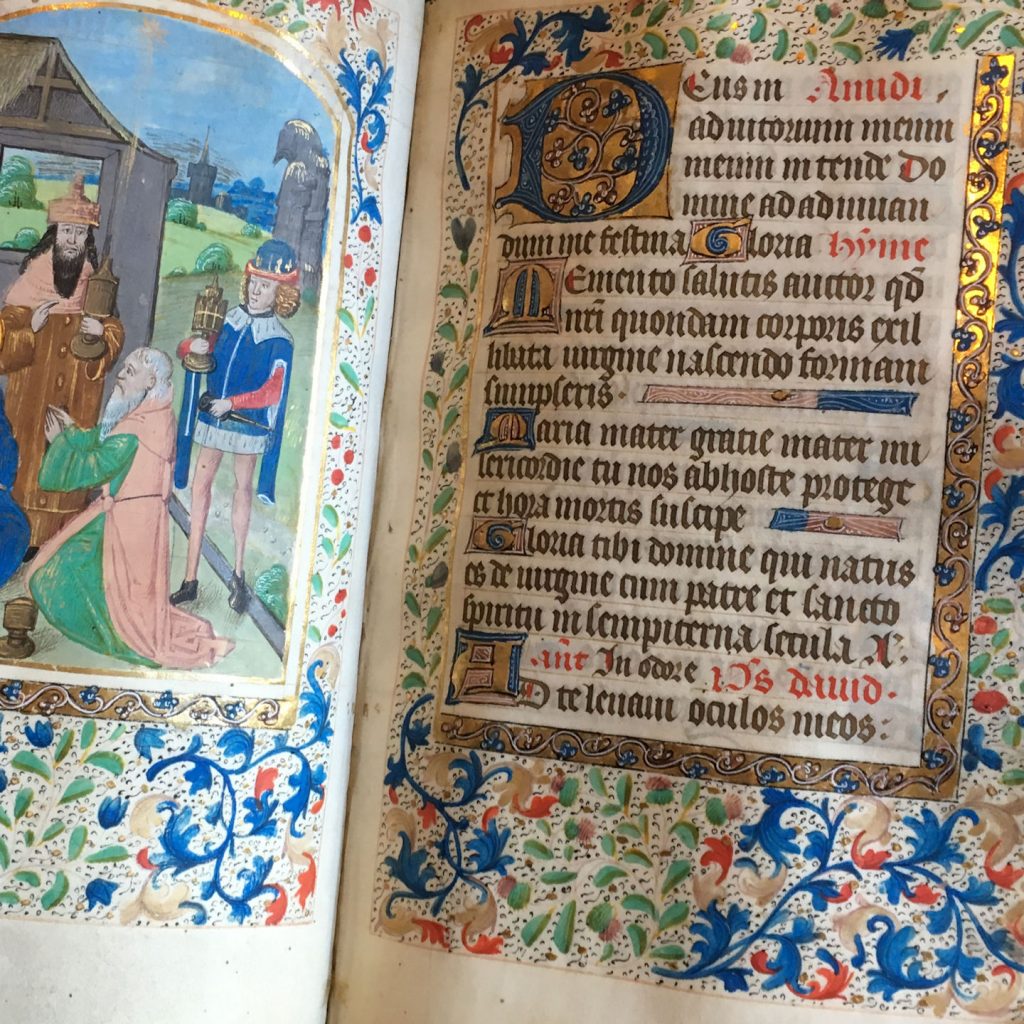 The Library is primarily a working collection but includes a number of older and rarer books acquired by gifts and bequests. Among these are 6 incunabula; 56 STC; 28 Wing books; and 30 pre-1641 foreign language books. The Library also holds a 15th Century Book of Hours (pictured).

Jenkins
Around 5000 volumes from the library of the late Canon Claude Jenkins (1877-1959).  Broad in scope, the collection has particular strengths in British, European and Ecclesiastical history.

MR
A collection of 231 volumes bequeathed by Marjorie Reeves (1905-2003), a Founding Fellow of St Anne’s whose research focused on, and sparked a revival of interest in, Joachim of Fiore.

Also held by the Library are Reeve’s notes, correspondence and other papers.

RP
Rosemary Pountney (1937-2016) was a leading scholar on the work of Samuel Beckett. She began performing Beckett’s one woman plays whilst working on her thesis in the 1960s and made many tours worldwide performing and lecturing on Beckett.

Much of her collection of 187 volumes on Beckett are annotated with notes and stage directions.

The Phyllis Handover bequest comprises books, working notes and correspondence on the history of book production and printing.  Some of these materials belonged to Stanley Morison with whom she worked at The Times.

The archive of alumna Helen Flint is a small collection of the author’s working notes, manuscripts, drafts and correspondence.

Bertha Hensman’s papers include lecture notes from her time at the Chinese University of Hong King, a collection of typescripts for her books and an undated photograph album of a trip in Kashmir.