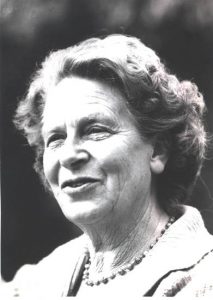 Marjorie Reeves (1905-2003) read History at St Hugh’s then acquired a teaching diploma and a PhD from London University on medieval mysticism and heresy. She taught History at a teachers’ training college in Camberwell before becoming Tutor in History for the Home Students, thus beginning a 65-year association with St Anne’s. Her work on Abbot Joachim of Fiore and on prophecy and millenarianism in the Middle Ages and in later centuries brought her an international reputation recognised in her CBE and Fellowship of the British Academy. She also wrote widely on educational policy, the local history of her native Wiltshire, and the Anglican Church. She contributed decades of devoted teaching and administration to St Anne’s. Ruth Deech in her address at Marjorie’s funeral commented on the lack of compartmentalisation in her life, and wondered if this was the secret of her remarkable serenity.