How did St Anne’s College become St Anne’s College, and why St Anne in particular?  What is now the College had existed for over sixty years before it ever came to be associated with the name of the saint.  This blog post will look at how and why the name changed over time as well as some of the alternatives that were suggested and tested along the way.

“There are 25 Students not resident in the Halls.  Most of these Students live in their own homes; some have come to reside with relatives for the purpose of attending the Lectures.  There are as yet no Students in lodgings.  The Committee and Officers of the Association will watch carefully the growth of any such class, and are prepared to make such arrangements for their supervision as circumstances may demand.”

This brief quote is one of the very first recorded mentions of the body of students that would one day become St Anne’s.  The fledgling Lady Margaret Hall and Somerville Hall had room for only a few students in 1879 and this lifestyle wasn’t always attractive or necessary to the early women students, many of whom were the daughters of Oxford dons.  Instead, they lived at home and attended lectures organised by the Association for the Higher Education of Women in Oxford (the A.E.W.).

The A.E.W. wished to maintain some oversight of these students and from early on mandated that any Oxford residence for a woman student had to be sanctioned by the committee.  Mrs Johnson, who later became the first Principal of the Society of Oxford Home-Students, was responsible for this and a great deal of other administration in her capacity as Honorary Secretary to the A.E.W.

The reports of the A.E.W. for this period make it clear that there was no one way of referring to the non resident students.  ‘Town students’ appears in the 1887-1888 report (pictured) and elsewhere ‘Students not attached to a Hall’ or ‘Students in the Town’.

It is not until 1890 that we see the first consistent use ‘Home-student’, the term that would be adopted and used for the next 50 years.

These home students gradually crystallized into a distinct body called The Society of Oxford Home-Students.

As Principal, Mrs Johnson offered her family motto Faire sans dire (To do without saying).  This and the beaver crest were formally adopted in 1913 after a majority vote.  Ruth Butler had put forward a series of arguments for the beaver the previous year, writing:

“(1)—The beaver is a silent animal, but most industrious, exceptionally intelligent, and fond of rivers!

(2)—It is further, a social animal, living in large communities composed of separate houses or “lodges,” each accommodating a family or household of five or six.

(3)—It not only does its own work, but “joins in work intended for the good of the community.”

(4)—It is, probably, an Oxford animal, as it appears as a supporter of the City Arms.”

As the Society grew and more women were attracted to Oxford for an education, it became increasingly normal for students to live as lodgers in approved boarding houses or hostels.  Two such houses, Springfield St Mary and Cherwell Edge, were run by religious orders of nuns and others by private landladies.

As early as 1924, students and alumnae protested that the term ‘Home-Student’ was inaccurate for this changing situation and requested that the Society be renamed or take a second name.  St. Martin’s was one such name put forward however with degrees for women only just having been won (in 1920), there was a reluctance to consider changing statutes again.  The formidable Mrs. Johnson, though no longer Principal, was still very present and fiercely protective of the Home-Student name.

“It is to our first Principal that we owe its retention, and let those who criticise it remember first its historic meaning.”

Resistance was largely held in check by the strong feelings of some tutors and alumnae, however in the 1930s calls were renewed for change.  It was no longer just the inaccuracy of the term ‘Home-Student’ that many objected to, but rather the effect it had on job prospects after graduating.

“‘No one even knows who or what we are,’ is the cry, ‘and our Beaver is always mistaken for a rat or a polar-bear!’”

“People outside Oxford…thought the Society was either a correspondence college, a domestic science college or a body of external students.”

In 1934, the Delegates of the Home-Students sent out 800 circulars to test the waters for any change in the Society’s name.  Just 282 were returned and of these only 110 were in support of change.  Two names, St. Mary’s and St. Frideswide’s (the name of the aforementioned Cherwell Edge), had some support but in view of the low numbers no alteration was made.

The men’s non-collegiate equivalent of the Home-Students had branded their sports teams as St. Catherine’s before formally changing their Society’s name in 1931.  Perhaps inspired by this and as a concession to restless undergraduates, the sports clubs of the Home-Students were permitted to re-brand in 1935 under the name St. Hilary’s, forming St. Hilary’s Hockey Club, Tennis Club and so on.

“Miss Burrows has pointed out that, in a contemporary biography of him, he is described as “a man rather of action than words” which, when considered in the light of our motto “Faire sans dire” only goes to emphasize the aptitude of the Delegates’ choice of saint.  I should, however, like to point out that the official title of the Society remains unchanged.”

St. Hilary’s didn’t stick around for very long, perhaps only for the duration of one undergraduate cohort.  One alumna recalling the name many years later wrote:

“Home Students were known as St Hilary’s for about a year until, ‘they discovered that St Hilary was a man, had a fit, and hastily renamed it St Anne’s’.  [She] was quite certain of this, ‘I can’t have imagined it’.”

In 1940 the Vice Principal, M. D. R. Leys, appealed for views for and against a proposal to alter the name of the Society, including inviting suggestions for a new name.  Her appeal was accompanied by two impassioned letters from alumnae who supported a renaming. 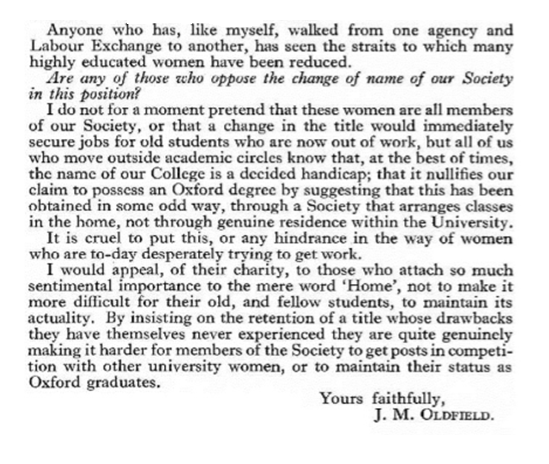 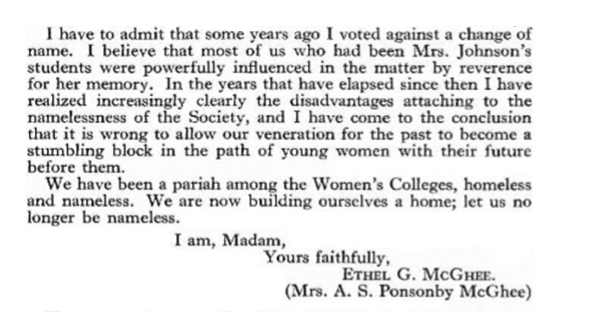 In 1941 it seemed as though the tide had turned at last, but what to name this new era for the Society?  The Home-Students had just moved onto a permanent site with the building of Hartland House in the late 1930s and so suggestions included Hartland Society after their benefactor or Johnson Society after their first Principal.  Both of these were rejected as sounding too much like a learned body (the Camden Society for example).  Saints names had already been put forward and would make the Society more integrated into a group that included St. Hilda’s and St. Hugh’s.  No doubt St. Hilary’s had opponents for being a man’s name but would also have added a third St. H- into the list, a problem for abbreviations and likely to have caused confusion with St. Hilda’s.

The papers of the Governing Body in Spring 1941 show great support for the name Hartland Hall, both from the benefactress herself and from a group set up to consider a new name.  The Tutors and Principal drafted a proposal to change the name of the Society to Hartland Hall with the proviso that if it should be rejected then they would instead adopt the name of a saint paired with ‘Society’.  The Hebdomadal Council of the University did indeed reject the proposal, being against the Society calling itself a Hall or a College, likely on the grounds that it had scattered sites and no single place of accommodation for its students.

A short while later the Finance & General Purpose Committee were discussing the importance of picking the name of a female saint to be sent for approval.  At the October 24th 1941 Tutors’ meeting, a vote was held to choose between St. Ann and St. Mary with the result of 8 votes to 4 in favour of St. Ann.

“Among various reasons suggested for this choice was a half-serious reference to Annie Mary Anne Rogers, who, moreover, had laid down: ‘You don’t want to suggest an aversion to marriage which was characteristic of so many of the saints’.”

In the end, St. Anne’s was probably chosen as the least objectionable option.  The Society of Oxford Home-Students had termly services at The University Church of St Mary the Virgin, one of the few opportunities when the whole student body could be gathered together each term.  This link may have made the idea of Mary or Mary’s mother, Anne, more appealing and historically there was also a chapel of St. Anne at the University Church.  Eleanor Plumer wrote to the Reverend Mother of Springfield St Mary (one of the hostels) in December 1941 to inform her of the vote’s outcome, saying:

The change received the formal assent of the University Congregation on 3 March 1942 and the King made it official in Council on 13 July 1942.  The Society of Oxford Home-Students was now St Anne’s Society.

With the War still in full swing there was little time to make any great fanfare about the change.  Financial shifts and changes to home life shifted the ‘home student’ lifestyle further in the years during and after the war.  Large North Oxford houses were converted into flats or filled with billeted soldiers and evacuees. Women became more reluctant to take on lodgers and all of the associated work of providing for them.

The Principal, Eleanor Plumer, was now on the the University’s Hebdomadal Council and looking for ways that the Society could gain full college status despite not having central accommodation.  While still a Society, St Anne’s would be controlled by a delegacy with members appointed by the University alongside elected tutors. In order to gain full self-governance, it needed to become a college.

In the Delegates’ Report of 1946 there were 261 students on the books; of these 51 lived at home or with guardians, 90 were in private accommodation or lodgings and a further 120 in formal hostels.

By 1950, 213 of 257 students were in formal hostels.  This was a higher proportion than in the other women’s Societies at the time and higher even than most of the men’s colleges.

This situation came to a head over finances, as St Anne’s now had a private income from endowments of £15000 a year on top of the £3000 it received from the University as a subsidiary body.  Despite this, the entire sum was subject to University regulations.  Both the tutors at the Society and the Vice-Chancellor saw the lack of sense in this and incorporation (as a College) was proposed.

On 29 April, 1952, the Queen approved the Charter of Incorporation and Congregation passed the necessary statute on 3 June.

As a college St Anne’s needed a coat of arms and was given permission by the Principal to use her own (of the Plumer family) alongside her family motto Consulto et audacter (Purposefully and Boldly).

This final departure from the Home-Student identity marked the start of a new era in which a ‘purposeful and bold’ vision would see the College go from strength to strength.