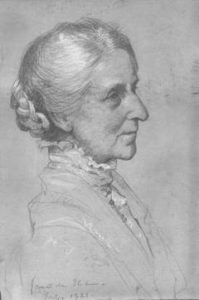 Bertha Johnson (1846-1927) became involved in promoting women’s higher education in Oxford in the 1870s. She was secretary to Lady Margaret Hall from 1880 to 1914, and to the Association for the Education of Women from 1883 to 1894. The Home Students however were her chief responsibility, and the AEW made her their Principal in 1894, a post she held on an entirely honorary basis until 1921. Ironically she was an opponent of the full admission of women to the University, believing that women’s education should not be assimilated to patterns developed for men. She and Annie Rogers, who succeeded her as Secretary of the AEW in 1894, were thus on opposite sides when a bid for women to be admitted to the Oxford BA failed in 1895-6. When in 1910 the University formally recognised the women’s societies by setting up its own Delegacy for Women Students, though, Bertha Johnson as Principal of the Society of Home Students became the first woman to hold a senior University appointment. Gradually reconciled to the campaign for full membership, she was also the first of the five women principals to receive the MA by decree in 1920. She was married to an academic (A.H. Johnson, historian and Chaplain of All Souls) but not an academic herself; nevertheless, enabling and organising women’s education at Oxford was her life’s work.