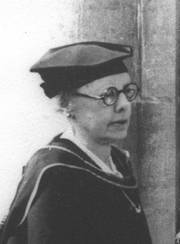 Eleanor Plumer (1885-1967) read English at Oxford as an external student from King’s College for Women in London. She remained at King’s College as a Lecturer and Tutor to women students, and subsequently became Warden of the Mary Ward Settlement (1923-1927) and of St Andrew’s Hall in the University of Reading (1927- 1931). Selected in 1940 by a small panel of advisers as Principal of the Society of Oxford Home Students, she retired in 1953 as Principal of St Anne’s College. The change first of name and then of status within the University was a complex and contentious business, steered with great skill and determination by Miss Plumer. She was the daughter of Field-Marshal Plumer and was in her element organising war work ; for a time the Library’s Fulford Room became a highly productive munitions factory, and Miss Plumer herself spent long vacations working as a factory hand at the Morris works in Cowley. She gave the newly constituted College permission to use the Plumer family shield as its coat of arms.