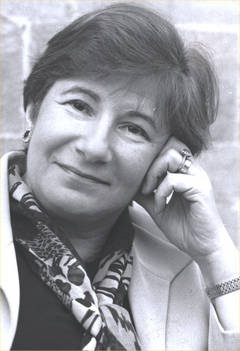 Ruth Deech (1943-) took a First in Law at St Anne’s College. After some years studying and teaching in America and Canada, she returned to St Anne’s as Fellow and Tutor in Law in 1970. She was called to the English Bar (Inner Temple) in 1967. She served as Senior Proctor, as a member of Hebdomadal Council (where after a long campaign she succeeded in setting up a University nursery), and as Vice-Principal of St Anne’s, and on Claire Palley’s retirement in 1991 was elected Principal. She has published on family law and property law. She was Chairman of the Human Fertilisation and Embryology Authority from 1994 to 2002, and was awarded the DBE in 2002. She took over as Principal with the ambition of raising the academic aspirations and culture of St Anne’s, and was rewarded towards the end of her incumbency with Finals performances (and thus Norrington Table positions) far better than any achieved since the College went mixed, and a Fellowship strengthened in many areas and particularly at the professorial level. Ambitious building programmes continued, and progressive developments in areas such as student welfare, computer networking, and fund-raising. Her consistent devotion to St Anne’s, to its students and all its members and staff, sprang from gratitude for the place she was offered in 1962. She retired as Principal in 2004 to become the first ever Independent Adjudicator for UK higher education.