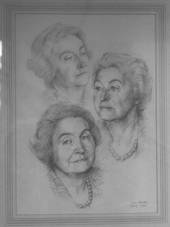 Claire Palley (1931-) received her BA and LLB from Cape Town University, and in 1965 a PhD from London University. She was called to the English Bar as a member of Middle Temple. Her distinguished academic career began in Cape Town and Rhodesia and continued at Queen’s University Belfast. She moved to the University of Kent at Canterbury where she was Professor of Law and Master of Darwin College from 1973 to 1984. She was a Council member of the Minority Rights Group, and her long and continuing association with the United Nations included crucial work on the Sub-Commission on Prevention of Discrimination and Protection of Minorities. Her publications include an authoritative Constitutional history and law of Southern Rhodesia (1966). Becoming Principal of St Anne’s in 1984, she poured her energy and acumen into moving the College from a period of necessary stringency and caution to an atmosphere of expansion and confidence. Student numbers grew to the maximum permitted, the Fellowship grew particularly in the social sciences, and she led the College into ambitious and successful building projects even when at the outset there was little sign of where the funds would be found. Never less than whole-hearted in anything she did, she took great care over the individual concerns of students. Claire retired in 1991 to continue her advisory work in constitutional and human rights law, and was awarded the OBE in 1998.