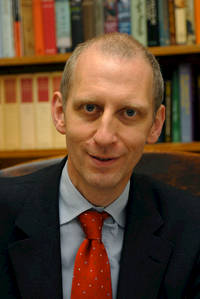 Tim Gardam (1956-) read English at Caius College Cambridge and received a double First. He is thus not only the first male Principal of St Anne’s but also the first Cambridge graduate. His career in broadcasting began as a BBC trainee in 1977. He went on to produce Newsnight, Timewatch, and Panorama, and to executive roles at Channel 5 and Channel 4 TV, where he was Director of Programmes and Director of Television. In 2004 he was a member of the group appointed to review the BBC’s Royal Charter. Having left Channel 4 in 2003, he was attracted to the “commitment to intellectual emancipation enshrined in the beliefs of the remarkable women who founded” St Anne’s, and was selected as Principal from a distinguished short list. He sought to build on the achievements of his predecessors, and in particular to put St Anne’s at the forefront of developing new University thinking in delivering what Oxford does best: the individual tutorial system, the close connection of undergraduates to academics at the top of their field, and a structure of Colleges, each small yet diverse enough for students to meet across a range of different subjects, in a cross disciplinary culture.