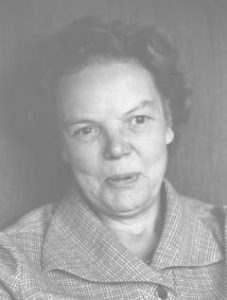 Nancy Trenaman (1919-2002) read English at Somerville, taking a First in 1941. She entered the Civil Service and rose to be Assistant Secretary in the Ministry of Materials, Counsellor at the British Embassy in Washington, and Under-Secretary at the Board of Trade. She came to St Anne’s as Principal in 1966 and continued with great energy and skill the many projects begun by Lady Ogilvie. To her fell the task of chairing the long and difficult discussions, begun in 1968, which in 1979 finished with St Anne’s accepting male undergraduates, graduate students, and Fellows. Her administrative skills and forthright personality, while they could not ensure a unanimous decision, did achieve a series of full and open discussions where the College’s options were understood by all. Outside College she served on the Civil Service Selection Committee and on the Royal Commission on the Constitution, as well as on the University’s Hebdomadal Council and many of its committees. She had a lifelong interest in music and was Moral Tutor to St Anne’s undergraduate Musicians. Her commitment, common sense, and independence of mind helped steer the College through difficult times of financial stringency and student unrest. After her retirement in 1984 she served as Chair of the Leprosy Relief Association.