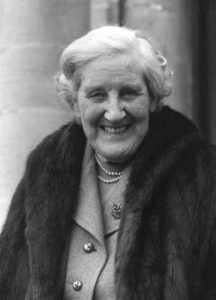 Mary Ogilvie (1900-1990) read History at Somerville, and shortly afterwards married Frederick Ogilvie, then a fellow of Trinity. She was much involved with his academic career, at Edinburgh and at Queen’s Belfast (where he was Vice- Chancellor), at the BBC where he was director general in war-time, and finally at Jesus College where he was Principal. After his death she was Dean of Women Students at Leeds University before coming to St Anne’s as Principal. Her thirteen years here were a time of bold and rapid expansion, of building and of adding existing properties (including the whole of Bevington Road South side) to the site. Expansion in numbers and in academic ambition accompanied the building; during Lady Ogilvie’s time 10 Fellows became 18, 30 graduate students 47, and 252 undergraduates 295; and towards the end of her Principalship St Anne’s came top of the Norrington table of finals results. She created Oxford’s first ever nursery for the children of staff, first ever mixed graduate institute (with Balliol, at Holywell Manor), first ever schoolteacher fellowship. She achieved a triumph of negotiation with the University Grants Committee (on one of whose committees she subsequently served) over the building of the Dining Hall. She is remembered as kindly and accessible to students, a shrewd entrance interviewer with a liking for “taking chances” on students.