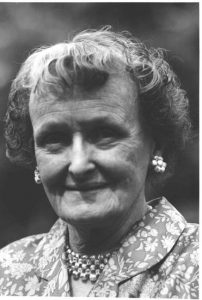 Kirstie Morrison (1903-1998) grew up in St Andrew’s and came to Oxford as a Home Student in 1923. By her own account she was told by another college that she was “not university quality” before taking the Home Students’ exam and winning a scholarship. She took a First in English and taught briefly at Bradford Grammar School, before returning to the Home Students as Assistant Tutor (1930) then Tutor (1933). She became a Fellow of St Anne’s in 1952, and our first ever Emeritus Fellow in 1973. Her membership of St Anne’s thus spanned 75 years; she was still an active user of the College Library in the 1990s. Like the others (Dorothy Bednarowska and Elaine Griffiths) in the great triumvirate of St Anne’s English Tutors, she did not publish but was a gifted and unforgettable teacher of generation after generation of students, noted especially for her mischievous sense of humour and her positive outlook. Like the others she would teach more or less any period, but her interests tended particularly towards Shakespeare and other Elizabethan drama. She gave an innovative series of lectures in the 1960s on the relationship between literature and art.