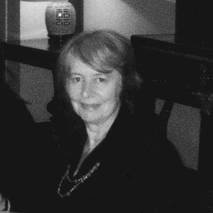 Mary Kearsley (1931-2013) was at Somerville and at Manchester University before coming to St Anne’s in 1958 as Tutor in Mathematics, though her research area was theoretical physics. She published on potential theory and Newtonian gravitation, and, a brilliant linguist, was one of the translators from Russian of Landau and Lifshitz’s Electrodynamics of continuous media. Her linguistic skills led also to an interest in Japanese culture, films in particular. Her devotion to her students, and the amount of time she was willing to expend on them, were legendary, and many successful generations of St Anne’s mathematicians are devoted to her. She retired in 1998 after nearly 40 years as a Fellow.