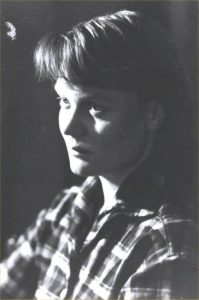 Iris Murdoch (1919-1999) was born in Dublin but grew up mostly in London. She read Greats at Somerville, taking a First in 1942. A period as an assistant principal in the Treasury was followed by relief work for the UN with refugees in Belgium and Austria. Discovery of Sartre and other existentialists led to a passionate engagement with Philosophy, and after a year’s studentship in Cambridge she became Tutor (later Fellow) in Philosophy at St Anne’s. She published on Sartre and on Plato, on metaphysics and moral philosophy, and of course her philosophical concerns are at the heart of the 25 novels for which she became famous, gaining the CBE (1978) and DBE (1987), the Whitbread Prize (The sacred and profane love machine) and the Booker Prize (The sea, the sea). She resigned her Fellowship after 15 years in 1962 in order to devote herself full-time to writing. She is remembered as a dazzling colleague and teacher, little interested in constraints of the syllabus, leading students on fascinating journeys from Rousseau to Worsdworth, from Thomas More to Michael Oakeshott, from St Anselm to Engels.