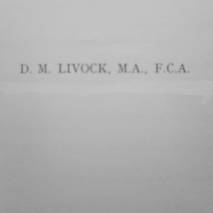 Dora Livock (d.1968) was a Fellow of St Anne’s from 1957 to 1961 as Bursar and then Treasurer. She retired early through ill health but in her short time at the College was a key figure. She brought with her professional skills in accountancy and administration, having in 1926 been one of the first women to qualify as a Chartered Accountant. She worked for Guy’s Hospital, for the Radcliffe Infirmary, and for the Nuffield Provincial Hospitals Trust. This last employment led to her being one of the founders of BUPA, of which she later wrote a short history. At St Anne’s she re-organised the College’s finances, skilfully negotiated the acquisition of several College houses, and crucially worked with Lady Ogilvie to achieve the building of the dining hall and kitchen. She was known as a skilful expositor of financial arguments to non-specialists, and as a devoted and much loved manager of staff. In retirement she continued to offer advice to St Anne’s, while also publishing for the Bristol Record Society a history of the City Chamberlains’ accounts in the sixteenth and seventeenth centuries (1966).