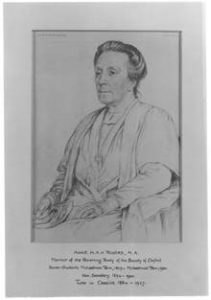 Annie Rogers (1856-1937) grew up in an Oxford academic family and in 1873 was entered in the newly established exams set by Oxford’s Delegacy of Local Examinations. Having come top in both junior and senior examinations, she was automatically offered an Exhibition at either Balliol or Worcester, until it was discovered that she was a girl, at which point the Exhibition was given to a boy who had come sixth on the list, and Annie Rogers received four volumes of Homer as a gift from Balliol. When in response to the controversy caused by this story the University instituted separate degree-level examinations for women, she promptly took them and won first-class honours in Latin and Greek (1877). She became a determined but canny campaigner for women’s admittance to full membership of the University, a story she tells with much dry humour in her book Degrees by degrees (1938). She was herself one of the group of women who were (retrospectively) admitted to degrees when the ban was finally lifted in 1920. Meanwhile she had become Secretary of the Association for the Education of Women and of St Anne’s pre-cursor the Society of Oxford Home Students; she was also on the Council of St Hugh’s. Alongside her campaigning she was an assiduous and gifted Tutor in Classics to Home Students and other women studying at Oxford.